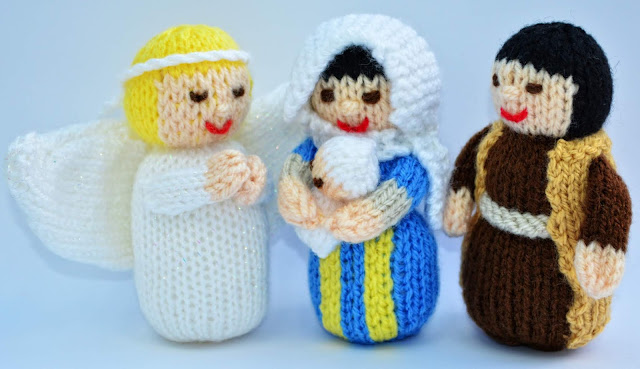 The Angel is knitted in Sirdar Snuggly Pearls DK which gives a little sparkle. I have also used Hayfield Bonus DK.
Mary has been knitted in blue, with a little colour in the skirt, as was worn by Hebrew women during this time. She also has a head shawl & of course carries Baby Jesus.

Joseph is wearing the natural colours as worn by Hebrews of that time. He has a tunic, waist band & over coat. 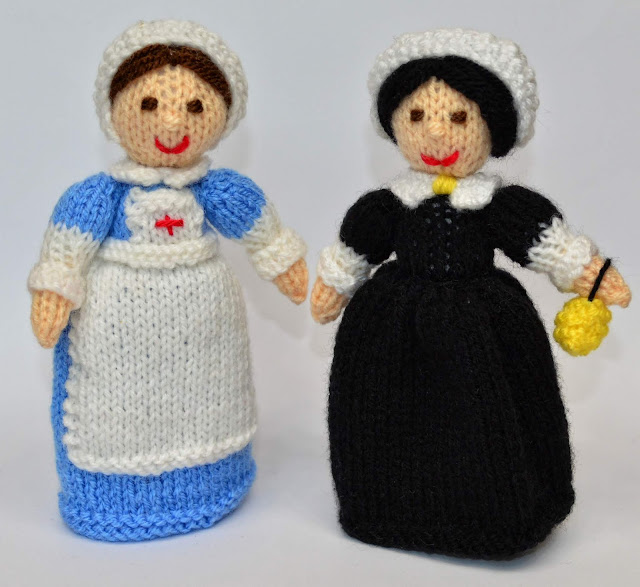 This is Clara - A WWI Red Cross Nurse & Florence Nightingale.


﻿﻿It is 2014 & during this year, in the U.K, we are remembering & commemorating those who served in World War I - 1914 to 1918. Paul Cummins & Tom Piper designed Red Poppies & these were placed outside in the moat of the Tower of London. 888,246 were made, representing each English Military soldier who died during the conflict.
I visited the The Tank Museum, Boverington, Dorset, U.K, in July 2014. There was a very poignant exhibition of the life in the trenches. It was very moving & this is where I bought a book.﻿﻿﻿

﻿'The Backwash of War' by Ellen N. La Motte. 'The Human Wreckage of the Battlefield as Witnessed by an American Nurse'. She was one of many inspirational women nurses at that time. My mother is also a nurse, nursing is a true vocation for my mother. She is also a member of The Red Cross & recently received her 20 years of service 'Red Cross Medal'. All this was the inspiration I needed to design Clara!


In 2012, my family & I visited the Florence Nightingale Museum, at St. Thomas' Hospital, London, U.K. It was not until I visited this, that I realised what an influence Florence had on nursing. This photo was a postcard I bought from the museum & what I have based my design of Florence on.
﻿

Florence Nightingale (1820 - 1910) came from a rich & upper class family from Great Britain. She was born in Florence, Italy, hence her name! Florence was the founder of modern nursing & was best known for her work in the Crimean War as 'The Lady with the Lamp'. In 1860 she laid the foundation for a professional nursing school, at St. Thomas' Hospital, London, U.K.

Florence Nightingale was awarded the The Royal Red Cross Medal by Queen Victoria in 1883.