Scrooge - A Christmas Carol - Ghost of Christmas Past Doll 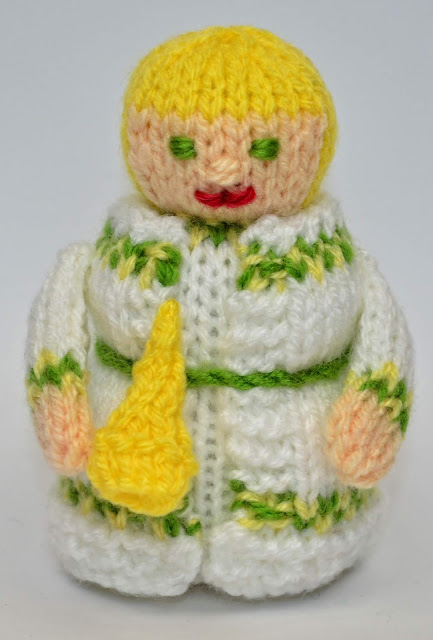 Here is the Ghost of Christmas Past from A Christmas Carol by Charles Dickens.

Facebook: https://www.facebook.com/edithgracedesigns
﻿﻿﻿
﻿﻿This is the Ghost of Christmas Past from A Christmas Carol. It was written by Charles Dickens and published on the 19th December 1843.

I have tried to design the doll with the text in mind, but still making it a simple doll to knit:
'It wore a tunic of the purest white...'

The main body is made up of white, including the additional coat and arms.
'...its dress trimmed with summer flowers.'

I have included light yellow and green on the main body, coat and arms to indicate flowers.
'...the crown of its head there sprung a bright clear jet of light...'

In the book the hair is white, but I have kept the hair a vibrant yellow to represent light.

A belt and extinguisher cap are also mentioned, which I have included in the design.