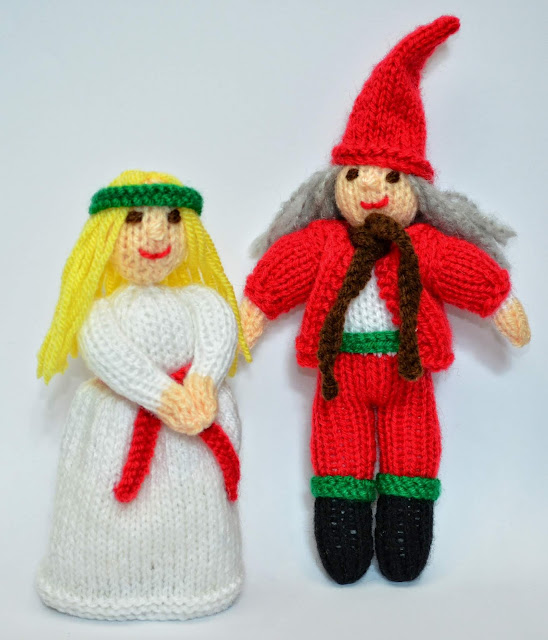 These are my little St. Lucia & Julenissen Christmas Elf dolls.

This pattern can be bought as a PDF Digital Download from - Etsy, Love Knitting, Makerist  & Ravelry.

In Sweden, St. Lucia's Day (St. Lucy), is celebrated on December 13th. When monks arrived in Sweden, they brought Christianity stories. St. Lucia was a 3rd century martyr. Her story told how she brought food & aid to Christians. She used a candle lit wreath to light her way, to leave her hands free in order to carry as much food as possible.
The beginnings of the Scandinavian nisse (pixies) started in the 18th & 19th centuries. I remember my friend's father telling me that they were little spirits who looked after a family or a farm. They lived under the house's stilts or lived in the barns doing chores on the farm. The family had to look after the Nisse well. Porridge was to be left out every Christmas Eve for the nisse. If not this would bring bad luck. From the mid 1800's the nisse became associated with Christmas, arriving at the front door on Christmas Eve with presents.